Posted by Manna-Symone Middlebrooks in Physics - Echols on Wednesday, June 13, 2012 at 9:43 am
For my 10% Project, I decided to film myself presenting three of my favorite animals at the Academy of Natural Sciences of Drexel University. There I am an Explainer in Outside-In, the children's nature section of the museum. I am also known as the "Bug Lady" because I primarily handle things like cockroaches, isopods, scorpions, and my personal favorite the tarantulas. The video below features three animals, a rosy haired tarantula, giant cowbird, and Eurasian legless lizard. 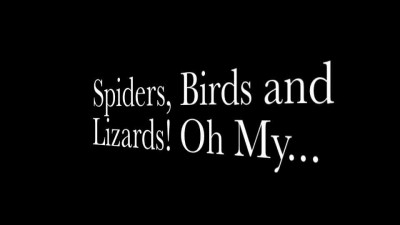 Scientists first began experimenting with invisibility in the early nineties, where they would place a very small piece of fiber optic material underneath a microscope. Afterwards, they would shine a very small laser on the material. As a result, the material appears invisible under the microscope. However, the process had to be very specific, and the procedure very precise, otherwise, it wouldn’t work. Not only that, but the scale was so small at only nanometer, that the whole discovery, while impressive, was entirely impractical. However, as the years went by, and as technology grew, scientists found more and more ways to test invisibility.

By far, the largest scaled experiment was conducted in 2004 by professors in Texas University when they took a hand-sized mirror and placed under several lights and cameras in a completely gray room. There, they electrically heated the mirror up to an enormous degree until it reached a point where the mirror reflected any light hitting it, making it appear gray and virtually invisible. This has a sort of ‘mirage effect’, which can be commonly seen on long, hot roads. However, despite the impressive scale, a suit that operated in a similar way would burn the user alive due to it having to be heated up to such an intense degree.

The most recent, and potentially most likely way for scientists to achieve full-scale invisibility came in the form of micro fibers. These little fibers were smaller than a single wavelength of light, which was required for what it was designed to do. When light hits it, it causes the light to diverge, or split, and go around the microfiber, making the fiber itself appear invisible. However, this is the smallest scale to date, and would require centuries of increasing technology and research before it may have some practical use. Still, it is effective, and impressive.

Invisibility has always been something only seen in the movies, but with enough effort, scientists may finally be able to make that a reality.