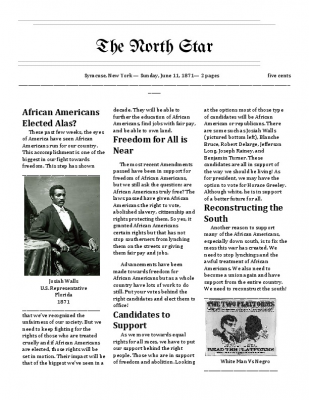 In this visual some of the key elements include the background information of the newspaper and the pictures. The North Star was a northern newspaper published in Syracuse, New York by Frederick Douglass. This is key information because newspapers will tend to have a bias, in this case a liberal perspective. It’s important to understand that not everything may be one hundred percent true in every newspaper or a certain article may have a spin on it. Since this newspaper is coming from the North, it’s going to try and persuade you to vote for the candidates who are in support of equal rights and abolition. Another important piece of information to notice is the date and the headlines that come with it. The date this newspaper was published was June 11, 1871, which was soon after the thirteenth, fourteenth, and fifteenth amendments were passed. These amendments abolished slavery, protected African Americans and their rights, and the right to vote. This is why the headlines support the date. They talk about voting for African Americans because they finally had the chance to be elected to the government. African Americans could freely learn how to read and write and become educated so they were able to run for congress and the senate.

Another important piece about this visual is the pictures. The image in the bottom right corner shows two candidates from opposing campaigns. It shows one standing for white men and one standing for black men. The image also has many words about negro suffrage written all over it and saying who was in support of it. At the bottom is written ¨The negro must be allowed to vote or the states be punished.¨ This is showing the advancement of freedom for African Americans.

This visual is important because it shows part of the advancements that African Americans made running for the government and being elected. The impact they had may not have been super strong, depending on what we determine as ¨free”, but they did make some headway in rights for African Americans.
Research: https://docs.google.com/document/d/14HMwzq4VtGXPhl-ijDS-34Q_8NSvD8BV1zQm3isrkFw/edit

I love how your newspaper looks like its from that time period including the title! Its consistent, has the right amount of information and many titles! Great job!

I really like your layout it's so nice. You did a great job

The layout is really cool and the info is very useful. Good job!

I think that your layout is great, it looks like a real newspaper and isn't too busy. You have a good amount of images too. In general, nice job.

I like the fonts and the spacing of all the words. I makes your newpaper clear and easy to read!

great job emma! i love it so much the layout is on point

I like the layout of your document and the pictures you put on.

I really like everything about the newspaper itself. However, I really like the layout of it and the titles and headers you used for each article.

I really like everything about the newspaper itself. However, I really like the layout of it and the titles and headers you used for each article.

The layout of the project is really nice, actually reminds me of a newspaper back then.