Who’s in it for the love?

Woody Allen's modern romantic comedy "Annie Hall" (1977) seems completely disconnected from the 16th century play "The Taming Of The Shrew". While the circumstances are wildly different, viewers can see how romantic relationships can be based on love for the participants, but looked at in different light by people close to those actually in the relationship. In "Annie Hall" The main character, Alvy, is in a relationship with Annie which is based on love and romantic attraction. The movie is based around their relationship and how it works and doesn’t. They both receive advice about what to do in the relationship and judgement on whether or not the relationship is right for them. In the "Taming Of The Shrew" Baptista, father of Katherine and Bianca, must judge the relationships that his daughters are about to start and what value they hold. Katherine is the older daughter and must get married first before Bianca who is more attractive to suitors, but finally Katherine gets married and Bianca becomes available for marriage. In both the play and the movie there is analysis from outside characters on the main relationship.

“Content you Gentlemen. I will compound this strife. ‘Tis deeds must win the prize, and he of both that can assure my daughter greatest dower shall have my Bianca’s love.” (Act- 2, Scene - 1, page- 101)

In the show the character Bianca has many suitors because of her beauty. In this scene the father of Bianca (a young woman who is available for marriage to either of these men) is negotiating who will marry his daughter. One man is older, while one is younger and both are seeking Bianca’s hand in marriage. Based on the times the father must marry off the daughter. In this scene and quote, the father is asking about one thing: money. The fundamental value underlying the father's question is how many material possessions will Bianca have when she is married. This is what drives his decision making. The father's main focus is not the romantic love, but the physical wealth of his daughter in her relationship.

This scene is mirrored by Alvy’s character meeting Annie’s family. The viewer can see that the family approves (excluding the anti semitic grandmother for ethnic based reasons, this grandmother character is used as a comical character) of Alvy based on the general lack of confrontation and tension. This is shown through their manners and actions. One example of this is Annie’s brother trusting Alvy enough to tell him deep thoughts in the next scene. Also based on the family’s positive reactions, the viewer can tell that the family approves of the relationship. The paradox is that at dinner Alvy is not an attractive person so there is not necessarily a reason for them to like him based on character traits. The context shows that the family is basing their judgement on other things. The viewers can infer that the family knows about Alvy’s stable economic and social position because of previous conversations. Alvy’s character is well off in life and this may be the primary reason that the parents and other family members approve of the relationship.

This Annie Hall scene goes even farther. In the later part of the scene we meet Alvy’s family. Before the scene is flashed up Alvy makes the statement that “the two (families) are like oil and water” but we can still see the values are similar. His family's immediate discussion is based on a relationship between two unnamed characters and their marriage. The comments are on the economic stability of the husband. They state he doesn’t have a good jobs and he’s too old to not have a career. This again is judging the basis of the relationship off the economics and not the love.

While the scenes and motives are similar between these two pieces there are many differences. For example in “Shrew” the negotiation and money settlements are very direct and outlined clearly. In Annie Hall the money is more on the outside of the conversation and hinted at, which is normal in the American culture. The context is assumed in Annie Hall and direct in “The Taming Of A Shrew.”

In this scene in the show Lucentio's friend is trying to tell Lucentio not to engage in this relationship. Lucentio is the main suitor of Bianca who fell in love at first sight. Tranio is his friend and servant. Lucentio has fallen in love with Bianca at first sight and he intends to marry her already, but Tranio says this line. This statement is judging Lucentio engaging in that relationship not based on feelings of love, but instead what Lucentio's future would look like. Lucentio was supposed to be focused on his education and Tranio’s statement is saying he should not engage because he would become sidetracked with the relationship. This line shows how Tranio mostly focuses on a judgement of the relationship not based on the love in the relationship. 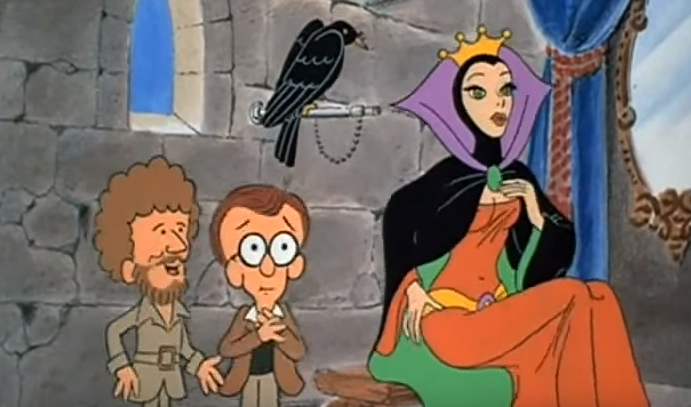 In this scene the cinematographers use cartoon to tell the story which is why it look different. In this part of the movie Alvy’s friend Rob is trying to be convinced by Alvy that he should leave his relationship based on love to pursue other relationship with different focuses such as sexual pleasure. In this scene Alvy is talking to the wicked witch of the Snow White story who is symbolic of a relationship. During their conversation, Rob comes in to try to convince him that a relationship that is based on love is not what is right for him. We can see that the witch is sexulized in this scene as Rob is convincing him that he should stop looking for love and focus more on short term pleasure. Rob leads Alvy into a date with a separate women and they hook up before Alvy realizes that sort of relationship is not what he wants, he would like a relationship based on love and not short term or sexual pleasure.

Obviously these scenes are different because these friends are looking at separate things. While Tranio is looking at Lucentio’s future, Rob is looking at Alvy’s immediate pleasure. The nature of the judgement is different because Rob is actively setting Alvy up. The differences are clear, but the link between these two scenes is how close friends give advice and make judgements on the relationship based on things other than romantic love. These show future goals and short term pleasure to be things that friends look for in relationships as higher priorities.

I enjoyed the fact that you chose to focus more on the outside characters and how they influence the main characters. I also enjoyed your visuals and the amount of pictures used, as well as the explanation towards each picture. Great job Luke.

This essay shows good writing style and I really liked it.