Some books you read can be good or not good and sometimes you would judge it by its cover saying “its going to be bad” or “not even going to read it”. That was my first impression of “The Innocent Man” but I began to read it and I changed my mind on my opinion about the book. I like about the story about how injustice in a small town in Oklahoma was changed by one murder and how one person statement can change a case.

The book tells the story of Ron Williams and how this affected him and how bad injustice can get. The story starts with a very brutal and disgusting murder of a girl that had made a small peaceful town where people everywhere knew each other was turn into fear, anger and rage, as the town was wondering about who could have done the murder and what the outcomes could happen to the townspeople if the killer is not caught.

This book is mostly about how the investigation went down, how the police made few mistakes and what they did wrong.  Ron Williams, a former minor league baseball player from the Oakland Athletics and famous in the town is one of the suspects in the investigation. He had been seen at the bar where the woman was at hours before she was found dead and he also had a drinking problem. So that made him very interesting to the police because of that.

He was tried for murder but had trouble being tried.  He and his friend were found guilty of murder and both were given their death penalty. Ron Williams story is a different one than you think he was a star in his town before the murder he was a baseball star and got drafted by the Oakland Athletes and firsted started in Class-A and also played in Major League Baseball but never made his dream of being an all-star player or winning a world series. This book is show more on how the american justice system can make mistakes and how it affects people. also when reading the book I felt what America could have done with this murder case and how it changes one persons life and the people around them.

The case was done by the Oklahoma State Bureau of Investigation (OSBI) to solve the case they were pressured to solve the case so they even used very little evidence to back up the case that never was part of Ron being guilty. there was very little to go on so they went on any lead they got to the case and they got very little from the leads only that it talked about Ron Williams and his friend. The case was filled with corruption and injustice and was tried unfairly and found an innocent man of murder.

The book had a few tricks in the pages its was a little hard to understand what was going on sometimes and sometimes it was not described well but still it showed how good the book is with photos of the trail and a lot of things. I thought that putting photos into a book helps to support describe about what the writer is trying to say. Also it is very describing about what's going on and about the scene, feel and smell. If you're a person who like very describing writing and visual photos in books then this is the book for you.

I read the book and I liked how they took this story about Ron and showed what happened and the injustice that happened. This book really shows how justice can be taken too far with no fair trial not enough evidence to back up the case or a witness to see the crime take place or DNA samples or blood samples. Even though the evidence was very week they were able to covent him of murder in the first degreg and sentenced to death and the thought what the OSBI could have done wrong did they convicted an innocent man. The book has very done a good job at getting the readers attention and keeps them interested in the book and keeping balance for both.

Overall I think the book the book is very good but some places in there are confusing but I would recommend this to people who like stories that target american justice system and what the effects can do of injustice to a person. 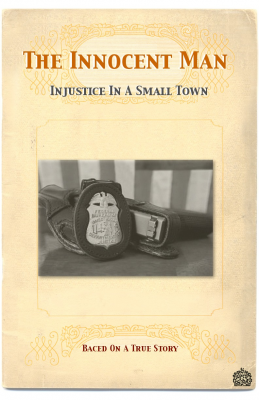 I know I'm reading a good book when the first couple of pages grab my attention. The Absolutely True Diary of a Part- Time Indian by Sherman Alexie is one of those books. Once I picked the book up it was almost impossible to stop reading as it was simultaneously sad while cheering me up with such funny stories. I saw on the cover of the book all the amazing awards it won from when the book was first published in the USA back in 2007 but I was not prepared at all for what a fun time I would have reading. Usually I’'m not much of a reader.

Sherman Alexie was born to a Spokane Indian mother and a Coeur d’Alene Indian father. Right after his mom gave birth to him they diagnosed Sherman with hydrocephalus (water-on-the- brain) and 6 months later underwent a brain operation from which he was not expected to survive. Despite his early disabilities in life he was at the top of his class and an advanced reader. One of his early educational institutions was a school on the reservation but he then sought a better education during high school at Rearden( a majority white school) where he was a top student and outstanding basketball player. He then moved on to Gonzaga University on a scholarship from where he transferred to Washington State University after two years to study pre-med.

Fainting spells in anatomy class convinced Alexie to change his major, a decision reinforced by a love of poetry and writing. He graduated with a bachelors degree in American Studies and shortly after received the Washington State Arts Commission Poetry Fellowship and the National Endowment for the Arts Poetry Fellowship.

The book is written in the first person, semi - autobiographical account of a boy named Arnold's life as a Spokane Indian living on the reservation with his family. Arnold's life story starts right from the second you open the book. You expect a kid that is born with an oversized head, oversized hands and feet, bad eyesight seizures and and a lisp among other things to have a terrible life. He is constantly beaten and called names like retard, etc. Having  terrible misfortune continued for him as he is dirt poor and his father is an alcoholic like most Indians on the reservation. Reservation culture didn’t hold high standards and expectations for any of its residents including Arnold  Arnold's life and well being was constantly threatened by bullies some of whom were even adults.

His life was not all sadness however, it had some bright aspects to it also. He had a friend on the reservation named Rowdy, a tough kid who had always been the person that was his bodyguard and knew him since they were both babies. Junior and Rowdy used to love to go to each others houses and read comics books over and over again. No matter how many times they read the comic books they would always laugh at the corny jokes. But the brightest things in Junior’s life were his drawings and basketball. Regardless of life’s challenges, he was able to take out his frustrations & express all his feelings on paper or on the basketball court.

No matter what you went through in life or what your social status is you will connect with this book. We will all go to high school or have gone to high school and had dreams for ourselves that we may or may not have fulfilled due to influences and personal decisions much like what Junior had to experience and go through to complete what he did at the end of the book. We've all been the new kid at school or I know we've all had that weird feeling of wanting to be accepted by everyone on the first day of school.

I chose to create a basketball for the creative part because I thought that when Junior blocked Rowdys shot in the final game of the season, it showed in my opinion that he had grown through out the book and he now had more self confidence and was not afraid to stand up for himself anymore.