Posted by Christina Santana in English 1 - Giknis - X on Sunday, January 17, 2016 at 11:14 pm
Listed below are pictures of our process and our Rationale. To view our program click on the last picture, and it will direct you to the pdf download. 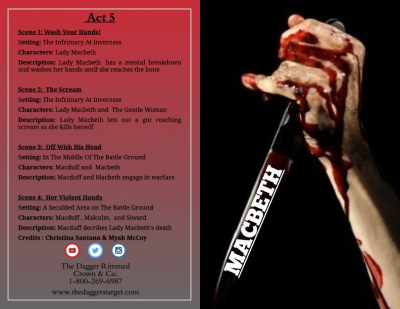 The purpose of our Macbeth Creative Project was to demonstrate our understanding of the book Macbeth in a unique and creative way. We could demonstrate this by creating a musical, playbill, board game, video scene description, theatrical playbill, etc. Christina and I decided that we were going to do a musical to demonstrate our understanding of Macbeth. We thought that a musical would be the most interesting way to recreate the story in a sense of singing and acting. Our musical consist of all five acts in the story. The characters that sing in the main two songs of our musical are The Three Witches, Banquo’s ghost, Macbeth, Lady Macbeth, and Various Lords. In Act 1, The Three Witches are singing their song “The Fortunes”  to Macbeth and Banquo as they tell them each their three fortunes. This is the opening act in the musical. We choose to include this scene because this is where Macbeth’s personality and mindset change and will progress from then on throughout the book. Now that Macbeth knows that he will be king of Scotland, he is willing to do anything to make that happen because of his vaulting ambition. In Act 3, Banquo’s ghost singings the song “A Ghost Hath Come” to Macbeth because he is trying to understand why would Macbeth hire murderers to kill him. We wanted to included this scene because this is where Macbeth has one of his many inclusions and shows his true state of mind.

The two main songs in our musical are  “A Ghost Hath Come” and “The Fortunes” . The Fortunes is sung by The Three Witches and A Ghost Hath Come is sung by Banquo, Lady Macbeth, Macbeth, and Various Witches. The lyrics for “Ghost Hath Come” show Banquo explaining his feelings about Macbeth knowing that he hired murderers to kill him. He feels confused, betrayed, and heartbroken that his closest friend would do such a thing. Christina and I wanted this song to have a sad and depressed tone to it so the audience can feel Banquo’s ghost emotions towards Macbeth. The lyrics for the song “The Fortunes” show The Three Witches telling Macbeth and Banquo their three fortunes. This song unlike “Ghost Hath Come” because it has a completely different tone to it. The tone of this song is comical and fun. It’s also much faster than Banquo’s ghost song. I wrote it like this because I wanted the witches to have a different approach to the musical. In the play the witches are creepy and scary, so I wanted them to come off as fun, creepy, and comically in our musical.

Other than the actual musical we also had to create a program for our musical. The program consists of each Act in story following various scenes from that act that Christina and I really felt stood out for us. All the scenes in the program have a song title based on what that specific scene is manly about. We decided to make it like this so when the audience reads our program they can have a better sense of what’s going on in the musical. The program also gives a brief description of each act and the scene that  goes along with it. It also has the characters and setting in that scene and act. Lastly, our program includes the lyrics of our two main songs so the audience can follow along when the characters are singing. This will make the audience have a stronger connection with our musical. Therefore, making our theater(The Dagger Rimmed Crown & Co.) business succeed.

I like how you guys included the lyrics. Very well done!

I love the Macbeth music

Nicely written with a clean layout! Where did you get the cover image?

Very well done and polished. The pages are very pretty to look at. Great job!

Love the organization the project is in. Very clear and creative.

I like the song titles you chose and your cover is awesome.

I like how you incorporated music into the project. The playbill is very well designed, I especially like the symbolism of the colors.

The play bill looks very professional, and it had a lot of eye catching colors

The layout of the playbill is easy to read and look at. I could imagine how the state would look like.

I can see you put in a lot of thought into your project.

You project is so amazingly awesome. I really can't say anything because it's really good. I love the names of the songs that you guys chose, they're amazing.

You project is so amazingly awesome. I really can't say anything because it's really good. I love the names of the songs that you guys chose, they're amazing.

I like the fact that you wanted to portray Macbeth musically and found your project very creative.

Your ideas were very creative and nicely executed.

Your idea is original and the titles of your songs are well thought out.

I really like your project and your songs are really creative!!