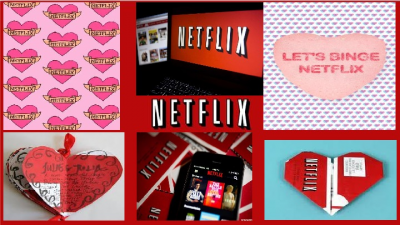 I chose the way this slide looks because in the articles  it said to make the slide noticeable. With the red background and the word ‘Netflix’ in the middle makes the readers know it has something to do with Netflix because those are the theme colors. I tried to make the text big because it said that big text should grab people's attention and it should get straight to the point. I placed a lot of things on the slide because I didn’t like the empty space rule. People might not notice the slide if there is a lot of empty space.

I chose to have all of the pictures on the slide say Netflix because that’s the main focus of the slide. The website said to make the slide easy to read. I thought it would look good if I clouded the slides with the word ‘Netflix’ because it shows that I’m passionate about it. It shows that my slide is connected to me in a real way. It shows that I care about Netflix.

I learned that you should contrast your colors on the slide. You shouldn’t make the colors blend in because people won’t be able to read what it’s saying. I changed the changes on my second slide because my first slide was kind of plain. I wanted to make this slide pop out. Research is very important when you’re doing a project because you need to understand what you’re talking about.

It seems a little cluttered with all the pictures. I would remove some pictures as a result.

Kyla, I think your slide is super eye catching, which is good. However, it is a little cluttered, so maybe taking away 2 or 3 pictures would solve that problem. Also, I think all of your colors work well together. Overall, I would give you an 85.

I think your slide gets your point across its just a little cluttered. Some pictures are close to touching the edges. Maybe just have a couple of pictures and center Netflix.

Your slide works well because the colors work together and contrast with the background. Also, your slide gets the point across in about 3 seconds. The only thing I suggest is that you should not put so many images on one slide, it's kind of cluttered. Overall you did a great job. 95.

Your slide catches the eye very quickly. I would say take away some pictures because it seems to be too much going on.

Your page is pretty cluttered. You could space it out and it would be improved. I do like your color scheme though. 85.

I think that your slides color scheme is very nice and pleasing. Although the slide is kind of cluttered the improvement between this slide and the other slide is very impressive.

I think your slide is very pleasing. It shows a main focus and it's colors go togehter nice. I think this shows a lot of improvment and would give you a overall 95!!

Your slide does a great job getting the point across thoroughly. Unfortunately, it is pretty cluttered. There's a lot of media in a small space, which makes it aesthetically displeasing. Also, many of the pictures are nearly touching the edge, which makes the viewer uncomfortable. Overall, I'm giving you an 85.