Posted by Ashton Reigner in Capstone · Kaur · Wed on Thursday, May 2, 2019 at 10:34 am
https://docs.google.com/document/d/1_mwPL6QThA1lODtLLlbUosY1uWrYHz3KR6m8xw0gYYs/edit
I wrote four essays about death, fear, love, and life. These things can be defined in many different ways but I wrote about the ways I have tried to understand these concepts. I wanted to write about these things because I believe they have a big part in all of our lives. I always knew I was going to write something for my capstone but I decided to do this because I think it could help a lot of people struggling with the things I write about. The past year has taught me so much and these essays are proof. These essays got rewritten and edited more than 10 times. I wanted to make sure these essays were something I could be proud to share. Writing about these themes helped me deal with them and I think it can help others too. That’s what I care about, helping others. I want to go into psychology and social work when I’m older. I want my life to be about making the lives of others easier. So many people struggle their whole lives because of things they don’t understand, I thought that if I could just make one person happier by sharing the things I learned, it would make me happier also.
Posted by Ashton Reigner in English 3 · Pahomov · B Band on Wednesday, May 2, 2018 at 12:28 pm 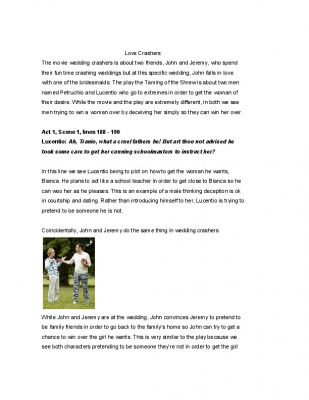 I had a lot of inspiration for my art this quarter. Everything I created has an explanation.  One thing I looked for is how I could make something that sampled things from other art. For this I looked to music and famous paintings that I felt had their own source of inspiration. While creating my drawings I used pastels and colored pencils mostly. I like to put as much contrasting color in my art as possible and these were two mediums that would allow me to do so. When I do my art though, I like to be in a certain state. When in the classroom, it’s hard for me to concentrate and open my mind up to create whatever it is I want to create. This is why I like to do all my art at home. When I’m at my house in my room, alone, I get fully concentrated and that is when I produce my best art. 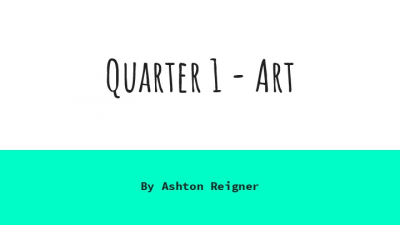 Donald Trump is the 45th president of the United States and has been in office since January 20, 2017. Since his election, he has done and said things that have never been done by a president before, none of which has put the country in a better place than it was before he came into office. From threatening other elected officials on Twitter to raising racial tension across the nation, it’s obvious that he is not fit for the job. For many reasons he has proved he is the most detrimental president in US history, but the most frightening is his attitude towards climate change. The biggest threat Trump poses is his threat towards climate change because of his censorship of science, his restruction of the EPA, and his choice in repealing previous environmental action made in the Obama era.

Being the president elected directly after Obama, Trump chose to undo a lot of the things Obama had done. One controversial decision Trump made was pulling out of the Paris agreement. This agreement was made to limit the amount of greenhouse gases released to help counter the climate change. Not only has he repealed this agreement, but he has also repealed a ban on offshore oil drilling. This ban was put into place after the spill caused by the Deepwater Horizon oil drill in 2010 and now Trump is repealing this ban opening the opportunity for another terrible spill to occur in the future. Choices like these put the US at a risk that even some of Trump’s own supporters don’t realize we have.

Along with the risk he has been imposing with the damage from his legal decisions, he has also been toying with the idea of nuclear warfare. Even before taking  office, one of Donald Trump’s favorite ways of talking to the public has been on the social media platform Twitter. On September 23, 2017, Donald Trump tweeted “Just heard Foreign Minister of North Korea speak at U.N. If he echoes thoughts of Little Rocket Man, they won’t be around much longer”. This tweet was published because the Prime Minister said to the U.N. that tweets like the one presented have been interpreted as a declaration of war on North Korea and that tweet was Trump’s response. The U.S. has the capability to launch nuclear missiles and Trump would be able to make the call. Nuclear weapons instantly kill all life in the target zone. One example is when the US dropped a bomb on Hiroshima. When the bomb was dropped in 1945, it decimated everything within a 4.4 square mile radius of detonation. The 2017 U.S. Military Index shows that the U.S. still ha these nuclear capabilities but the public does not know the full extent of these capabilities. And since the time when the last bomb was dropped, technology has only improved which means any new bombs that could be dropped would be more harmful than anything the world has ever seen .Donald Trump’s immaturity and cavalierness about nuclear warfare can be more harmful to the U.S. than the citizens fully understand.

Since Trump has been in power, he has had the harmful opportunity to put more of his own relatives and closest allies in higher positions of power. One position that Trump has changed is the Environmental Protection Agency (EPA) Administrator. The role of the EPA administrator is to enforce and keep the environment clean and as healthy as possible. This is a very important position and Trump has selected a man by the name of Scott Pruitt to take that role. This man is not as known to the world compared to Trump but both of them have proven that they lack a full understanding of what is actually happening to the environment. Climate change is a very real thing and it is only going to get worse as time goes on. Humans in their entirety have caused a lot of the negative change and humans have to be able to realize that if they want to be able to improve the destruction they have already caused. By contrast, Scott Pruitt believes that the science proving climate change is “Far from settled.” Before being elected for the position he is in now, Scott Pruitt sued the EPA - the agency he now administers - because he wanted to remove Obama’s Clean Power Plan. Obama’s Power Plan was the first federal restriction on how much carbon pollution could be emitted from existing power plants. This was meant to reduce pollution levels up to 30%. This plan is now in the process of being completely removed now that Scott Pruitt has the power to do so. Donald Trump is the only reason Scott Pruitt now has this power.

The president’s full term lasts four full years. Donald Trump has yet to complete his first year and the U.S. is under more threat than most of its people realize. Climate change has the potential to destroy all of civilization on this planet and Donald Trump is making it worse. Not only is Trump making climate change more of a threat to the present, but he is bringing the destructive potential of nuclear warfare closer and closer to the country and other countries that don’t deserve it. Donald Trump is putting the U.S. at more risk for their lives than humans have ever been before.

“The Manhattan Project and the atomic bomb.” Khan Academy, www.khanacademy.org/humanities/ap-us-history/period-7/apush-us-wwii/a/the-manhattan-project-and-the-atomic-bomb. 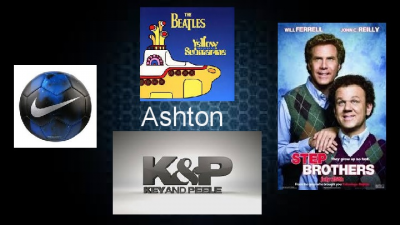 I learned a few things from my critique. One thing I learned is that I had incorrect spacing in between my photos. Another thing I learned is a couple of rules about signs and billboards. I learned the rule of thirds where a billboard can be divided into 3 areas. I also learned about the sizing of my name. People said it was a little too small so I made my name bigger. Another critique I got was about my background. So I took away my previous background and replaced it with a background that sort of matched the colors of the photos. I also changed the soccer ball so the color could match the background. All in all, I am happier with my new and improved slide.
Posted by Ashton Reigner in Spanish 1 - Manuel - C on Monday, November 30, 2015 at 11:16 am

No me gusta escribir 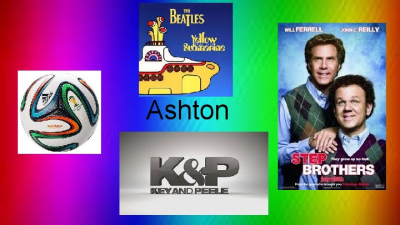 I thought about my slide a lot and I decided to put the things that give my life joy. So i picked my four favorite things in my life that aren't people, pets, or food. One of the big things in my life is music and one of my favorite artists is The Beatles. Their music is really relaxing and has a lot of meaning. Watching movies is one of my favorite things to do inside. I love so many movies but my favorite movie is Step-Brothers. I probably watched it 100 times and it still makes me laugh every single time I see it. My second favorite thing to do inside is watch TV. There's so many TV shows I watch but I really love Key and Peele. It stars two guys making hillarious skits about the most absurd situations. It's on of the funniest shows on television. The last thing I chose is soccer. I've played soccer since I was 3 and it's been my favorite sport for as long as I can remember. It's a sport loved and played all around the world. It's not easy to play but it is really fun. This is me and all of the most joyful things in my life
Posted by Ashton Reigner in Technology - Freshman - Hull - b1 on Monday, October 26, 2015 at 10:34 am
In class today, we watched a video about witnessing bullying. A boy got bullied by kids and we pressed a button to see what would happen if a witness spoke up. The classroom activity was finding out who we are online. We googled ourselves and wrote about what we saw. It makes me think about how many kids in the world are getting bullied and it also makes me think about all the people seeing these kids get bullied and are just watching and not doing anything to stop it. Online I appear as old bald dudes. People perceive me as an old bald guy. The goal of internet trolls is to make people angry. They put all of their energy into making people feel bad and creating situations to hurt and discourage people. The positive results of online anonymity are that you stay protected from weirdos. The negative results are people use online anonymity to hurt people without having their identity given up.