Posted by Joziah Matos in CTE Senior Capstone · Kamal/Ugworji · Wed on Thursday, May 28, 2020 at 9:15 pm
Posted by Joziah Matos in Art - Freshman · Hull · c2 Band on Friday, June 9, 2017 at 10:28 am
My element was copper. its atomic number is 29 and has a few different uses. it was first discovered on a island as small beads in prehistoric times. Now, it's used as water pipes in houses and was even used to make Lady Liberty and bullet shells, which sparked my imagery. i saw that some bullet shells were made with copper and i found that very interesting because i never knew that. i always thought it was made of another metal. so instead of using a penny or a pipe as my design, i used what i learned and made a bullets because of the copper shells bullets have. when creating my print, i had to first draw it on paper then trace it on tracing paper. i had to put it on tracing paper so that i can flip the image backwards so the words can be read when the print is finished. we then traced our image on a styrofoam plate. this was going to be the stamp. after the image was traced, we then applied paint to the plate and put the image on paper. when the plate was on peper, we had to apply pressure to the plate so that all the ink falls from the plate to the paper. when the ink made its mark, the image was finished. overall, i liked my image, but i feel like i would change some things about it. i wish i applied more pressure to the edges of my project because not all of the paint made a mark on the sides. i thik i would have also gotten rid of all the negative space so the image can pop out more. my favorite part was making the design because i learned a lot about copper and its uses. it was also very relaxing to draw. this project was fun and i like my results.
Posted by Joziah Matos in Spanish 1 · Manuel · X Band on Tuesday, May 23, 2017 at 7:34 am
https://sites.google.com/scienceleadership.org/e1-u6-panama-trip/que-necesitas
Posted by Joziah Matos in Art - Freshman · Hull · c2 Band on Monday, May 15, 2017 at 9:17 pm
Negative space is the part of an image that is empty and works with the more full parts of an image (positive space) to draw your attention toward something. it helps compliment a part of the picture to give the picture more meaning and emotion. in my image, both negative and positive space is shown. on the left side, the black is negative space because it's the surrounding image while the main image is the positive and is the focus point. same with the right side, the blue is the negative space.
Negative and positive space is important because it allows an artist to draw attention toward something that wouldn't be noticed right away. for instance, if you wanted to get a point across, as an artist, you wouldn't use only positive space because there would be too much to look at and nothing would stick out most. but if you use both positive and negative and used the negative to surround your main point, it would stick out more. it can also add meaning to the image.
Posted by Joziah Matos in Art - Freshman · Hull · c2 Band on Friday, May 12, 2017 at 9:04 pm
For the pass 4 class periods in art, We were given a task to create a stamp that represents me. My own symbol that everybody can see and know that its mine. We first started with a sketch. My first idea represented me the most because it related back to the thing i love music. So i made an MPC with a hawaiian print behind it. It was a good design up until i realised that i couldn't use it. It wasn't a good design to be cut out into negative space. I then decided to make an old 60s style TV. Why? because i like old fashioned stuff and my first album had an "old look" to it. I started designing and came up with a perfect concept of where the positive and negative space was going to be. After i figured that out, i continued to cut it out on the last day and put it on paper. overall, i like the way my stamp came out. I feel like i did exactly what the objective was and describe myself in an image. And because of the thought and work i put into it, it all came together and made a art piece i love.
Posted by Joziah Matos in Spanish 1 · Manuel · X Band on Friday, April 7, 2017 at 7:57 am

Yo Oigo no estres

Yo no toco mal

Based off of the tips that were given to me, i decided to take them into consideration. On thing that was an issue on my slide was the font being too hard to see from afar. Now i changed the font that is a bit more bolder and sticks out more and puts more emphasis on the quote. Another issue was that my name was too close to the art on the right and it made it hard to read. So i just moved it a tad to the left giving me the semi-changed product you see now. From all of this i learned that the font of the text does put an impact on what you're trying to say. And the research you do also plays a role in deciding how the board is going to look in the long run. 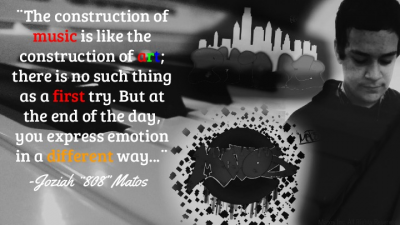 The assignment was to simplify my Me Magazine into one picture and present it. This task wasn't as easy as it seems. It seems like it, but not really. The fact thing that made everything really difficult part of this whole project was thinking of an idea for my slide, without going overboard. The goal i went for was to incorporate everything i put in my Magazine to one picture, but my problem was i talked about something that was completely different from each other. Till i came to the conclusion that the Mag. was all linked together by one thing. They all tell my emotion in a different way. So that's when i came up with the quote, “The construction of music is like the construction of art; there is no such thing as a first try. But at the end of the day, you express emotion in a different way.” I decided to pick and choose word to make a differnt color so that it sticks out to people reading. At this point i then tried incorporate music and art in one picture. That's when i thought of putting graffiti and a piano in the picture. And all of these show my qualities from my Me Mag. 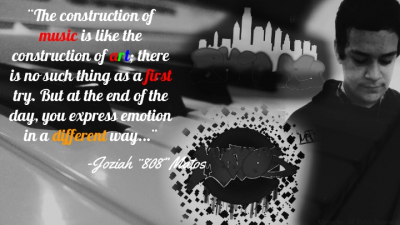 Explain your L.A.N. Local Area Network - all the devices on your internet connection.

The devices that are connected are mostly portal devices, such as phones, laptops, and tablet.

I learned that wifi and the internet are two totaly different things. I then also learned that there are two kinds of routers, a router and modem combination router and a modem and router (not together)

What would you tell other people that they need to know about having an ISP/Home network?

i would tell people that believe it or not, your home network and the internet are totally different.