Cinematic - The choice of camera angles was definitely intentional. Blue and yellow lenses often come into play for almost all of the scenes with Nick. Theatrical - Nick and Amy’s cat is definitely a symbol. The cat is viewed as an omen for what lies ahead. Literary - Smooth Dialogue. Narration is overwhelmingly cool and sensual. Almost to trick the viewer into the real mood of Amy Dunne. “Amy not only crafts her own narration, but controls it.”

Breaking down the Anatomy =

Joshua Rothmen (The New Yorker) “I enjoyed Fincher’s film on its own terms, in all its abstract, intellectual, postmodern glory.” Rothmen says that the film is full of texture and detail, a psychological thriller. The twists that upturn the plot really change the narrative which makes it so interesting to watch. Ignatiy Vishnevetsky (AV Club) “The movie traffics in flashbacks and backward twists that purport to reveal more and more about its dissatisfied central couple, but which only uncover facades.” Visgnevestsky also says “Fincher’s style—with its looming ceilings and motel-murder-scene lighting—can make something as simple as a man going out for a cup of coffee look like a procedural.”

Rothman, Joshua. “What ‘Gone Girl’ Is Really About.” The New Yorker, 8 Oct. 2014, https://www.newyorker.com/books/joshua-rothman/gone-girl-really.

What inspires me as a dancer? When coming up with an idea for this project, I wanted to dive into my passions. One passion of mine is dance. This film showcases my emotional journey through dance, while I also incorporate the history of dance to what we do now. I wanted to film my performances along with a summary of styles and techniques. I believe this will be important when watching my film because it will give a deeper understanding of why I choose to do this. This is a compelling project because it is something that I have dedicated so much of my life to. I have taken so much time out of my teenage years to perform and learn and I want to express that with other people. It is more than a sport, it is an evolution that has developed for years to come and is still changing as I type. I want to not only showcase my ability, but also the dedication and hard work that goes into something this difficult but beautiful. 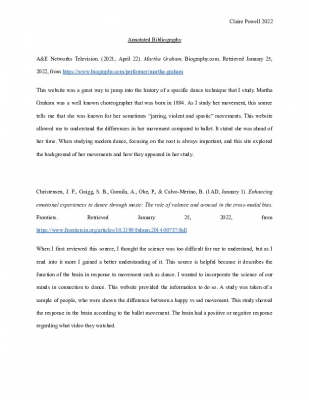 When watching The Royal Tenenbaums, the majority of the songs stuck out to me. They were sweet hymns that matched perfectly with the setting that was currently playing. After I had finished watching the movie, I actually looked up the soundtrack so I could add some of these songs to my playlist. I found them very fitting and I believe this is part of the reason why I loved this movie so much. Soundtrack is so important when creating a film. Not only the lyrics need to resonate with the viewers but also the tune and melody. If you think about it, a film with no music would be quite boring. Music helps move along the scenes and also can help the viewers connect to the film. I find it quite difficult to pair songs to a specific scene because all scenes are so unique and they must stick to a proper theme. The Royal Tenenbaums have a light-hearted, warm tone that goes along well with the soundtrack that was used. I believe that a few of my ideas go well with my interpretation of this film. A Day In The Life by the Beatles was something I instantly thought of when looking at this movie. Not only the album cover speaks Tenenbaum but the upbeat melody of guitar and piano really stuck out to me. This movie is about family and the upside downs of the difficult relationships within a family setting. This song has a lot going on at once, similar to the family dynamic. The events in this film are confusing and at times emotional. This song stuck out to me because it is going through the day in the life of someone in a chaotic manner. The few scenes where Margot falls in love with Richie makes me think of a complicated love song. Because that is exactly what that is, a complicated relationship. When I think about these characters I find warmth and happiness in their relationship. Although it is strange, Wes Anderson seems to still make it beautiful. And that is why I thought of the song Can’t Get it Out Of My Head by Electric Light Orchestra. This song was made in the 70’s and this movie takes me to a place somewhere in that time. The style that Margot wears is chic and expressive. It resembles something of the 70’s. “Searching for her silver light, and I can’t get it out of my head…” These lyrics remind me of Richie when he is going through a depressive episode searching for the one person that loves him. As he tries to commit suicide, the director plays an almost cheerful tone while this is going on. It reminds me of this song, bitter but hopeful, almost like Richie and Margot’s relationship. Another Beatles classic reminds me greatly of this film. Strawberry Fields Forever comes to my mind when I think about the Royal Tenenbaums. Something about the relaxation of the song that almost seems like it’s slowed down. I believe it would fit perfectly within this film because there are moments where it seems as though the world stops moving. Margot is in a rut with her relationship, Royal has become poor, Chas relives the moments with his late wife, and Richie seems upset with his current situation. Although this song is not necessarily depressing, it takes the tone down a few notches and gives you time to think and ponder the relationship of this strange family. As we take a look at the depressing side of this family, another song that draws me in is Colour My World By Chicago. This slow flute that plays in between the chorus really reminds me of the way in which these children were living their life after they became adults. Although they had a pretty reliable childhood, things seemed to change for the worse when reality hit them. This song seems to fit right in with this soundtrack because once again it is from the 70’s, much of which this movie reminds me of. Colour My World feels as though he is longing for something, or someone, a lot like most of the movie. Although much of this movie does have recurring themes of grief and loss, there is a cheerfulness that comes along with it. The Royal Tenenbaums does celebrate a happy ending. Dust In The Wind by Kansas seems to bring some kind of ending to this twisted story. When the movie ends, I can still imagine what happens, and if that is possible, that means the movie is good. I believe that this song also has a sort of “ending” to it. Something that says, this movie is over, but the story is everlasting.

There is no doubt that “Psycho” is a psychological thriller. It even says it in the name. When looking at the original movie posters for this film, they usually showcase a bright font over a heavy black-and-white image of some iconic part in the movie- usually the shower scene. For my poster I thought it was best to not give anything away. And that is exactly why I choose Norman with his taxidermy owl. It foreshadows the creepy events that are showcased in this movie, without telling us what might happen. The image itself is intense enough to lure people into watching it. The quote and fonts just add more detail and description. As for the title, I wanted to go with something that was mentioned in the movie. I do think Psycho is very fitting, but as I watched this movie, the term did not seem to be used and I believe I could come up with something more relatable and creepy. I chose “The Mother in Me ” for many reasons. As the case of the murder is solved, the audience finds out about the psyscology aspect for Normans behavior. It is explained to Sam and Lila that Norman experienced trauma from his mother at a young age which causes him to act as a second identity in ways that resemble his mother, who is deceased. In today’s terms we would call this “multiple personality disorder”. Without this disorder, there would be no movie, soley why I wanted the title to relate to Norman’s disorder. As you look at the subtle details of this poster, you may notice the two shadows that fall behind Norman. The owl above him only has one shadow. I believe that Norman has two shadows because of his split personality and the ways in which he resembles his mother and himself, but wrapped in one body. Symbolism like this is always something that should be included in a movie poster. It is vital that the audience has some small sense of what is to come, especially if it is a thriller. This poster would be more appealing to the general public based on these small changes I made. There are very iconic characteristics that go into every classic horror poster. Including the large red font and intense image that sets the background. All of these details set up a clear direction for the viewers of this film and future viewers.