The two people in our group are Darlenny Rodriguez and Lilly Roman.The project we decided on was to “disneyfy” Macbeth. We wanted to take Disney songs and remixed them to form a new twist on Macbeth.  One of our songs included “Can You Feel The Betrayal Tonight” or better known as “Can You Feel The Love Tonight”.  We decided to this because we wanted to make a project that not only the audience will love, but what we would love making. Disney is a classic point that everyone can relate and understand. Not only can it help you understand Macbeth better, but it also brings this Scottish Tragedy in a creative and funny way. After all that, it makes blood and murder something fun to listen to, in a weird and twisted way, that is. After deciding to “disney-fy” our dear Macbeth, we sketched out our calendar, who was responsible for what (90% of which was collaboration anyways), and how/where we would do our work. Had we done this project again, I think we would’ve kept things the same for the most part. We worked together very well and got the things that needed to be accomplished, done in a relatively organized manner. Although, a couple things we could improve on would have to be out audio for the songs. The recordings are clear, but they are a bit hard to understand only because at times we were either singing too low or too high and the app did not allow us to fix that problem. At times we found our self re-recording songs over and over again to get it just right. Our songs can be found here!!!!

As far as the album cover goes, that was an idea that, sadly, we cannot take credit for. So that being said, I believe we would like to thank Mrs. Giknis for suggesting to do so. Though we wanted to create our songs, we were not quite sure what we would be handing in exactly. She suggested that we could create a vinyl-ish cover and put the lyrics on the back. We instantly took a liking to the idea and decided to go with that. However, later down the road, we decided to record the songs online instead and we would post those digitally on canvas, but still, we took the album idea to heart and decided not to part with it. Instead we would put the names of the songs on the album and turn the rest in digitally. What we used to record is called Ujam, a website Darlenny had found. After making an account, we were able to edit and save the songs to the website. We agreed that we would then share the link to the songs on canvas. Ujam was very easy to use and even though we aren’t exactly the “best” singers in the whole world (especially because one of us isn't a singer at all) we are very proud of our work and out tons of effort went into making this and not making people's ears explode.

One thing that was really tough getting through were the lyrics. At times we were able to finish a song on the spot, but at times the lyrics were off with the music and it because a mouth full to say at a time and we needed to find the perfect ones, that also matched Macbeth. Lilly was a huge help when it came to the lyrics, she was boosting with excitement when it came to songs we were going to use and ended picking amazing songs. The lyrics can be found here. Overall, this project was a complete success! 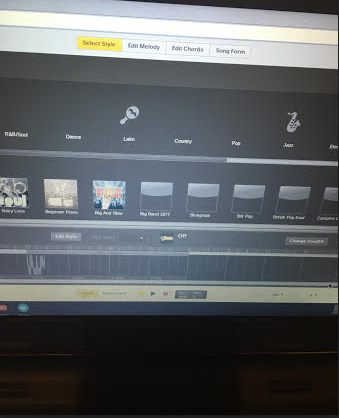 The lyrics are amazing.

I love the songs, I laughed when I heard just a floating dagger

Some of the writing on that playbill looks spectacular, not to mention the songs are amazing. I loved this.

I loved this project so much! You both have such beautiful voices!!

The songs were amazing!

This Disney version is so creative and different, especially for the Macbeth story line. Your voices are AMAZING!!!!! BREATHTAKING, actually.

I think that the idea to add a Disney touch to Macbeth was very creative. It's pretty cool how you didn't just submit lyrics, you actually submitted the recorded songs. Do you want to kill King Duncan is my favorite.

I really love the creativity and thought you put into remaking these songs and including your understanding of the book.

the combination of Disney and Macbeth is something new and never thought of.

The lyrics are a great combination of Disney and Macbeth. Everything's murderous but still has a touch of playfulness.

I love how you chose songs where some of the original lyrics fit and created awesome lyrics for other parts. Great singing and I love the Disney theme.

I like how you added such a dark theme to some otherwise innocent sounding songs. Do you want to kill King Duncan is my personal favorite.

I like how you chose to put a twist on the songs and the cover of your list of songs is amazing.

This is was a very well done creative project. I already love Disney, so I realized that you made some of the original lyrics fit into the song. It was amazing.

liked how you made the Disney Macbeth songs

I like the fact that you had a Disney hat on his head. That is very funny and great idea for Macbeth to be disneyfied.

I liked this a lot! The cover, creative titles, and amazing twist on the song lyrics are awesome! Also, the fact that you guys recorded six songs makes this project even better!

I like the effort and creativity in the songs.

I love all your songs. Do you know where I can buy the album? I really like that you guys sang it rather then giving us lyrics.

I like the lyrics for each of the songs.

A lot of fun ideas and a large amount of creativeness

I know we don’t have to comment right now but this was super cute so I had to. The songs are adorable. I’m a big fan of Be Our Guest and Can You Feel the Betrayal Tonight. So good!