Posted by Aedan Dejong-Dougherty in CTE Senior Capstone · Walker-Roberts/Ugworji · Wed on Thursday, May 20, 2021 at 11:58 am

When starting my Capstone, I had a few things I wanted to achieve. My capstone is a stop motion animated film put together through drawn and sculpted images. Through the different components, I wanted to make something that was less narrative and more abstract. I started by thinking about the emotions and the feelings I wanted to evoke and see if I could come up with a visual interpretation of them. Taking the literal meaning of the word and its place in the story made very interesting and evocative images. They tell a story of a relationship as its ending and the way unreciprocated love manifests for the main character. The other important part is the music and audio. My goal was to combine different instruments and techniques to make something meditative and hypnotic. Some parts are acoustic instruments, as well as organic sounds, and some parts are entirely digital. Each piece is equally important and relies on the other for the project to be whole. This project is still ongoing although I hope to finish it in the very near future. https://docs.google.com/document/d/1mA2PuFmM2SN0kGjAEGXyRvWY5YpSiOOBFHfUdoYPoKM/edit?usp=sharing

This is my capstone project on racism in the sport of Ultimate Frisbee. I chose to talk about this because I am a black male playing the sport and I have seen issues myself pertaining to race and I have talked about them many times so with this being said, I felt like it was time to bring the issue to a bigger platform to be more widely heard. Starting Point https://docs.google.com/document/d/1buVwqwRdYDs26Nx8z-cvZbEU9mvzzi7565Q4CjnUV7s/edit?usp=sharing Bibliography https://docs.google.com/document/d/1WhYzIPACY0eLgQIGjZPVW-H_jWiN7PakHmzYwt4VuAk/edit?usp=sharing https://youtu.be/clzWJltj5wU Here is the link to my Capstone

Posted by Christopher Jacobs in CTE Senior Capstone · Walker-Roberts/Ugworji · Wed on Monday, May 17, 2021 at 6:36 pm

For my capstone I decided on doing something I found a rekindled love, I would say I have for. Which was stop motion. I decided to make my capstone about stop motion because it is something that has been in my life for a long time and I knew as soon as we were assigned this I wanted to do something for it to show my work throughout the past year. So in this project, I decided I would go for an informational video that discusses the overall history, and how to make a stop motion yourself that I feel would inspire others hoping to make their own.

Here is the doc where I started everything: https://docs.google.com/document/d/1PUyX8_LOUJOPGp5XaKjfmHicusLNqtJzNhWl22JW55c/edit

For my capstone, I've created an app with which you can play card games on. I've spent the past while both developing the app and working on the system's UI. Though I wasn't able to get the game online, I'm quite pleased with my finished product, and hope to update it every now and then. Here's the link to an overview of the project: https://docs.google.com/document/d/18z-MpCI_RFpwbZFs8gEOb-uhOL6Q3dQuo0ifWDSPp6Y/edit?usp=sharing And here's the bibliography: https://docs.google.com/document/d/1TOOZvr0IwbsXuBiYqYh386tG60ggNGicq94ivktLyoA/edit

For my capstone project I chose to make a small parody film about what goes on in the mind of a procrastinator. Throughout the year my capstone goal had been changed around a lot, from me wanting to make a full professional film to me just wanting to make something silly and amusing. I decided to take out a small part of the film that I initially scripted since this scene had included both the stereotypes of your average procrastinator while also contradicting some of them. Most procrastinators are seen as lazy and unproductive, so I decided to show said procrastinator being productive despite it not being what the procrastinator initially wanted to do. Throughout the school year it was very difficult to focus on school due to in-home responsibilities, so there were many times when the need to focus on my home responsibilities overpowered school. My film was mostly an opportunity to toy around with premiere since past years I didn’t get much experience with it.

Throughout the course of the year my capstone has fluctuated, morphing into what it is now. My goal was to create a piece of work that takes people out of the stereotypical roles society has placed on them. For my capstone I wrote some of a script and filmed a scene from it. From the scene I wrote earlier in the year to the form it took in the manifestation of it as a video are different in some ways but the idea came through. I hope to continue to create videos and films that allow people to see themselves in all spaces and refine my creative skills in the process. 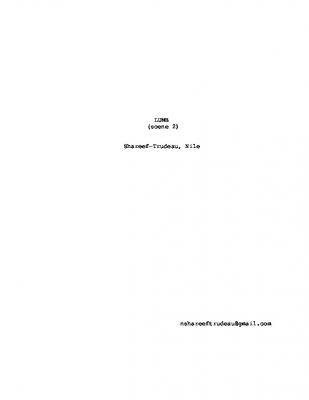 During the 2019- 2020 school year many students grappled with the unfamiliar reality of nationwide virtual schooling. The Philadelphia School District has been online since March of 2020 and there have been many cases of students struggling to stay motivated,Many seniors and juniors of less fortunate/funded high. Most 2020 high school graduates lost their privileges to go to prom, take a senior trip, and close out their high school journey strong. Nationally the perseverance of students and teachers was the essential part in making sure online school was a success during the following year . For my capstone I wanted to focus on how students grappled with the new norm of virtual schooling. Furthermore I aimed to open up what it means to maintain your mental health in a pandemic.

For my capstone, I knew from the beginning I really wanted to engage my creative side, a side of myself I haven’t gotten to use all that much at SLA outside of the Digital Video program. Pre-pandemic, I’d started conversations with students and teachers alike about starting a theater program, but when the pandemic hit it became clear that that wouldn’t likely be possible non-virtually. I ran through a couple of other ideas, none of which really piqued my interest, and then realized that maybe I ought to focus on things I’d been focusing on all along, photography and portfolio building. My first choice college was SCAD, and I could earn up to $5,500 in scholarships for a portfolio. As college can be quite expensive, optimizing financial aid and scholarships was (and is) very important. In short, my goal was to explore myself as a developing artist and a candid self-critic, and observe how those two parts of me can clash and/or work together. And to attain a bag (obviously). Website: https://kkohl214cdd.myportfolio.com/ Bibliography: https://docs.google.com/document/d/1cN9cTzgKTNto6y7QCBkF9DiVD-AxWPZZV1BfAz-v1Sg/edit?usp=sharing

The website above showcases a photoshoot with the purpose of exploring teenagers’ relationship with self-image and self-love. The goal of this project was to show the subjects themselves through a different lens and, hopefully, invoke newfound feelings of confidence and spark a positive change in their self-image. I wanted to explore this topic further because self-love is something so many teenagers struggle with across the world. I, myself, struggle with the idea of loving and accepting myself for who I am, so this topic is very near to me. I also think that this is a centering topic that allows me to bring a lot of my passions into a single project that has the potential to help as many people as it can reach.

For my capstone project, I’ve decided to transform an empty room into a room for my younger sister, Rylie, but how can I transform a small room into a bedroom? I wasn’t sure if I could do this project individually, so I enlisted the help of my mother and her boyfriend. We had so many ideas for the room, but due to the limited space, we were only able to implement a few of them. Working with others not only allowed me to acquire experience, but it also made me realize how much I enjoyed interior design. I’ve spent most of my time mood-boarding thoughts and trying to visualize what I want to put to fruition. I decided to add all of Rylie’s favorite items, such as books, creatures, and colors. I’ve discovered new material about interior design as well as new things that Rylie enjoys in the process of my capstone project.